Is an audiovisual piece in which we try to hear and see things in a different light. With the help of an infra-red camera and coils that pick up electro-static fields, video and sound material is generated live. That material is then transposed into audible and visual range and further processed, manipulated and decorated. Premiered at Acker Stadt Palast, Berlin, May 2019. 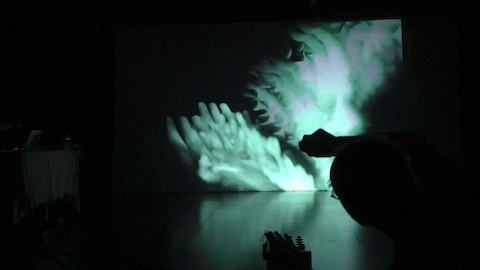 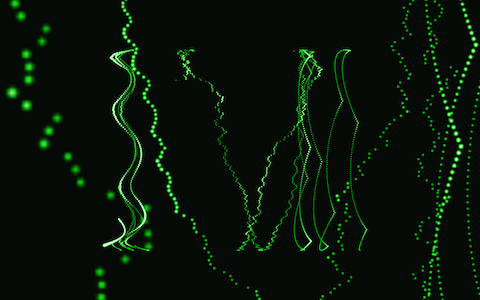 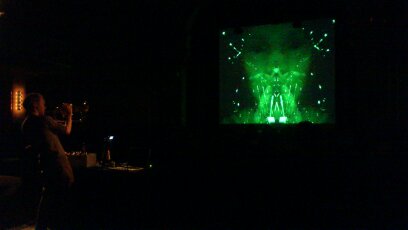 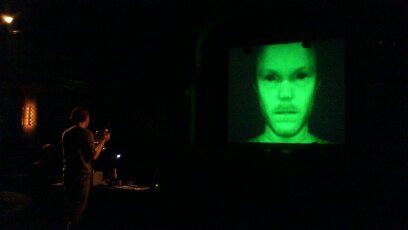 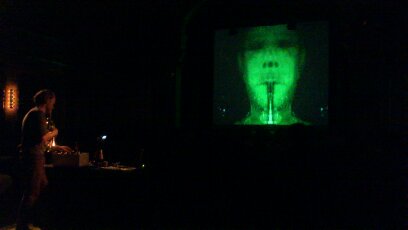 Released 03nov2014: medley (CP0X0F) on the ChordPunch label.
If you do not want to buy the record, you can type in the code and render your copy of the sound file. The program code for the music is in SuperCollider3 format and available on the ChordPunch release page. 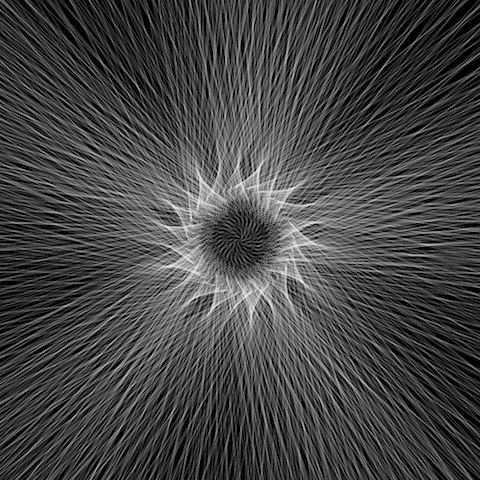 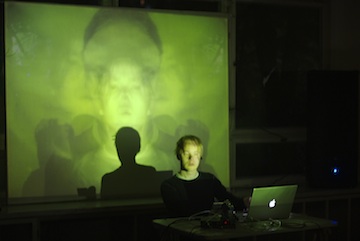 A piece with hundreds of led lamps. In collaboration with Jenny Michel. Premiered at the festival Sound of Stockholm 2013. Also performed in Berlin. 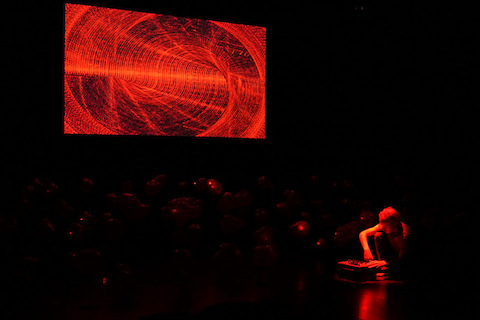 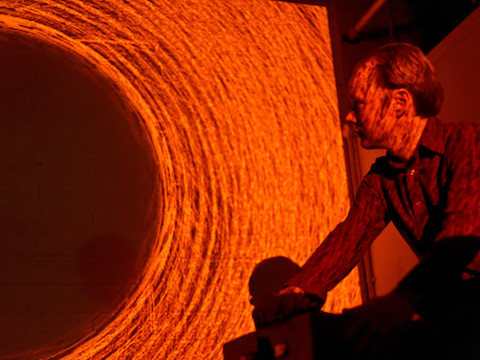 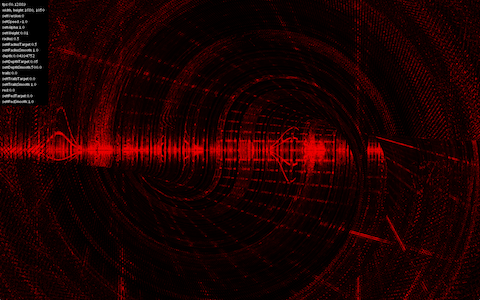 An audiovisual performance piece where I take on the role of a sad clown with a great fascination for red spheres and noisy sounds. All electronics, wireless sensor network, generative music and graphics were developed during my six months as artist-in-residence at IAMAS, Japan 2008
redUniform has been performed ten times; in Japan, Sweden, Germany and Spain. 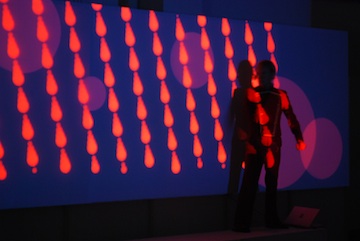 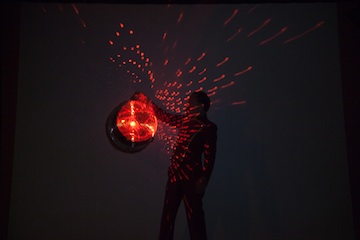 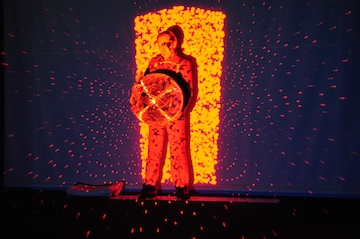 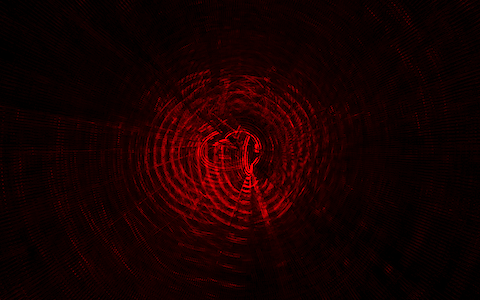 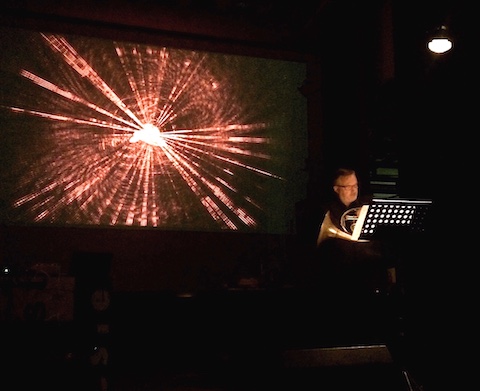 An audiovisual piece commissioned by the Peärls Before Swïne Experience. It is a piece for violin, piano, flute and cello plus generative electronic sounds and graphics. The musicians follow a score that is also the projected graphics. Premiered at the Gothenburg international film festival 2013. Also performed twice in Canberra April 2013, once in Luleå Sept 2013 and also at Kulturhuset Sound of Stockholm Nov 2013 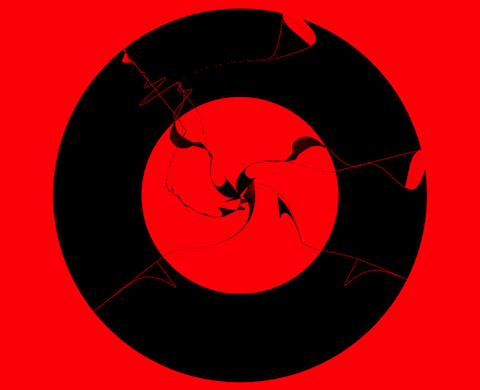 "it takes all the running you can do, to keep in the same place. If you want to get somewhere else, you must run at least twice as fast as that!"
-- Through the Looking-Glass by Lewis Carroll

redQueen is an audiovisual system in which everything always goes faster. Sound and graphics spin around in an ever-increasing speed - until it all comes to a complete standstill. This piece plays with the thresholds of human perception. Premiered at NK in Berlin 2014 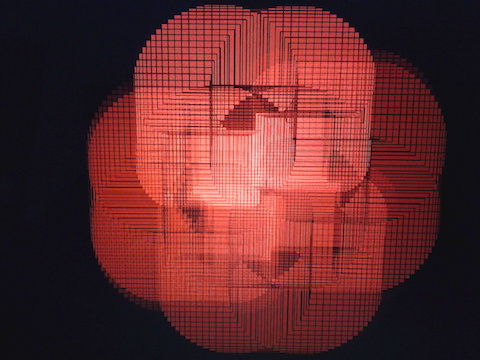 A battle between a human performer and a malicious software program. No matter how well the performer 'sings', the software always win. The work is based on an earlier piece called 'The Choir, the Chaos' and was first performed in Corfu in May 2010. Also performed in Barcelona Oct 2010. 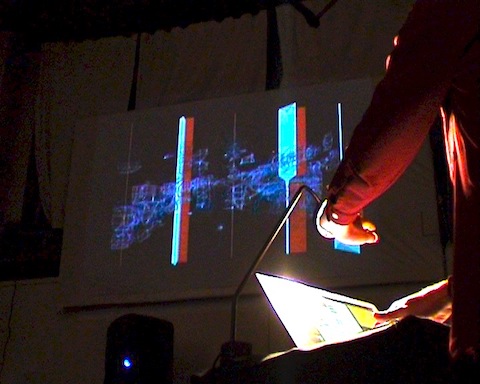 The Choir, the Chaos🔗 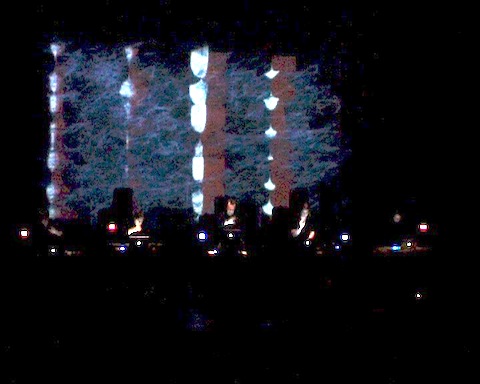 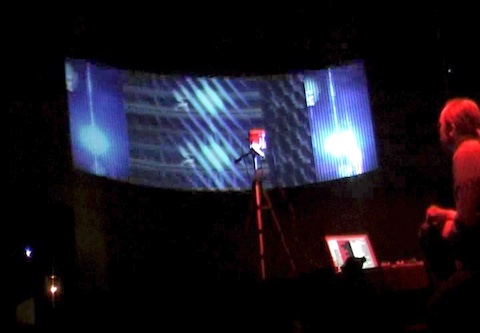 Noise duo together with Mathias Josefson. Trying our best to cancel out all noise from the world. 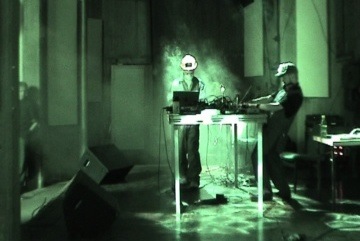 live at Norbergfestival04, photo: me

My idea has been to build a simple and easy to use framework for webjamming using the opensound control (OSC) protocol and SuperCollider by James McCartney. The framework now exists and it let members of our virtual band contribute with their favourite instruments, i.e. sounding patches written in SuperCollider, to be played by themself or by others live via the internet.

The number of people participating in this virtual band is varying from time to time and the overall structure is very loose. At its most, there have been seven players from both North America and Europe jamming together using this framework. And whenever there is a concert gig coming up, we just bring as many members as possible together over the net and makes sure there is one computer running the current set of instruments at the concert location. As no audio data is ever transferred, just control information, we have got no problems with latency or lousy audio quality due to compression.

The framework is currently based on a peer-to-peer network structure but that is subject to change in the near future. A client/server network has some significant advantages in this case mostly concerning the distribution of instruments within the network and dynamic connections. The new server application that I'm now working on will let people log in, share instruments with other connected players and jam using a simple SuperCollider client patch.

The first cd of algorithmic dance music, published by mushimushi ltd (2001), has some of my music on it. mushimushi.net/morpheus/.
Thanks to Julian Baker and John Eacott for producing.

This is my first piece for tape (1997). It's built by manipulating sounds coming from a hurdy-gurdy (trad. folk instrument).

A piece for 3 dancers, 6 speakers and 3 microphones. In collaboration with Zufit Simon and Artblau.

Music for a 30min piece by Zufit Simon.

Music and video for a 55min piece by Zufit Simon.

Music for a 50min piece by Zufit Simon.

This suite from 1997 has never been played due to the high demands on the musicians.

A 10-minute piece inspired by old low budget horror movies. It's built around a trumpet feature and written in 1996 for Tim Hagans and Norrbotten Big Band.

This piece is kind of ironic. Performed by KMH Jazz Orchestra in Feb. 1999, Conducted by Maria Schneider.

My very last 'jazz' composition became more of an acid jazz thing with heavy use of 'the amen breakbeat' drum loop. It was performed at the jazz festival in Sandviken 1999 and featured Lasse Lindgren on electrified trumpet.